⚠ Wash your hands, cover your cough and stay home if you’re sick. Get the latest COVID-19 advice. 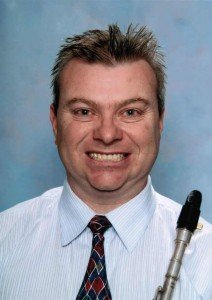 Mr O’Brien’s musical career began in the Australian Army Band where he was principal French Horn for over seven years. During this time he also played in many orchestras and shows including Willoughby Symphony Orchestra, Penrith Symphony Orchestra, Newcastle Symphony Orchestra, Miss Saigon and the Phantom of the Opera. He is currently a lead musician and music director of the brass quintet in the NSW Ambulance Service Band. He is also a lead musician in the Corrective Services Band where he was the stand-in conductor for two years. He currently co-conducts The Harmonix Concert Band which is a community band at Castle Hill for people from primary age to retirement age. Since leaving the Army Band Mr O’Brien has learnt to play all the instruments which are in concert bands and prides himself on his knowledge of these instruments, including the servicing and repairs. He has been involved with many successful school band programs as a conductor and instrumental tutor over the years and prides himself in presenting music with a passionate and entertaining atmosphere.